In the spirit of the holidays I’d like to share the story of the newest member of my family. (please note that this long post is slightly off-topic.)

In February 2007, the Humane Society and local authorities raided a farm in rural Tennessee and found over 100 dogs living in horrible conditions in a barn. The dogs were in very poor health and many didn’t survive. One particular dog named Wolfbane was found outside tied to a tree. Although there are no records, he appeared to be part German Shepherd and part Siberian Husky. Given his appearance and behavior, there was also the distinct possibility he was part wolf. 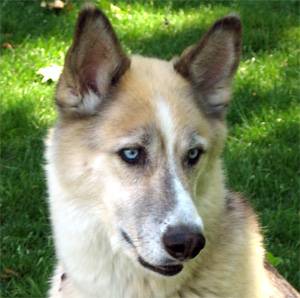 Upon arrival in Buffalo, he was taken to the vet where they found two serious medical problems. The first was a bad case of heartworm. He was treated in the hospital for two days and spent the next several weeks recovering. His weight dropped to 65 pounds (he should weigh around 95). The second problem was x-rays revealed that he had been shot. There was a .22 caliber bullet lodged in the base of his back. The doctors decided that it was too dangerous to remove and that he would be better off with leaving it in place. I adopted him on May 2. He is fully recovered from the heartworm and is now living the good life in upstate New York.

Rafe is definitely a Web 2.0 dog. He’s recently become a member of dogster.com and the aspca social networks. The husky in him makes Rafe the consummate escape artist. Since I prefer not to spend my days chasing him across the Western New York countryside, his next birthday present will be something right out of everyware. Dogtracs uses the latest GPS and wireless technology to notify you via text message if your dog leaves his “geofence”.

I will be taking a brief hiatus to enjoy the holiday with family and friends. Happy holidays and best wishes for the coming year.